DxOMark has taken a very long while, but finally it has started to test the selfie cameras on phones.

DxOMark does the testing by analyzing over 1,500 photos and over 2 hours of video, captured by using each device and 10 phones are already tested.

The Samsung Galaxy Note9 and the Google Pixel 3 share the top spot, which are way ahead as the third-placed Xiaomi Mi Mix 3. The existing flagship of Apple, iPhone XS Max is behind it on the fourth place. An interesting thing to note is that the Galaxy S9+ displays a much lower score as compared to the Galaxy Note9 in spite of the similar hardware. The most reasonable explanation to this is that the Galaxy S9+ got tested earlier than its camera update came out. 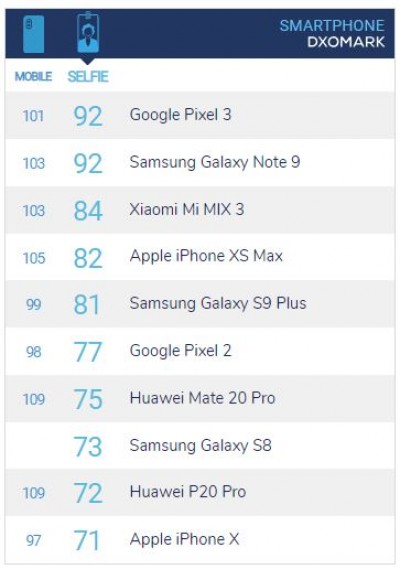 As DxOMark says, the Google Pixel 3 has got the best selfie photos, brought out by the best texture and detail (even producing some noise). The Galaxy Note9 is giving you a cleaner look but having less noise (and as a result, it is less detailed) but it is still the best video selfie taker having some great color rendering, stabilization and wonderful face exposure in every condition.

The innovative selfie portraits of the Xiaomi Mi Mix 3 were praised.