Australia is experiencing a record-breaking heatwave which triggered wildlife casualties, bushfires and an increase in hospital admissions. 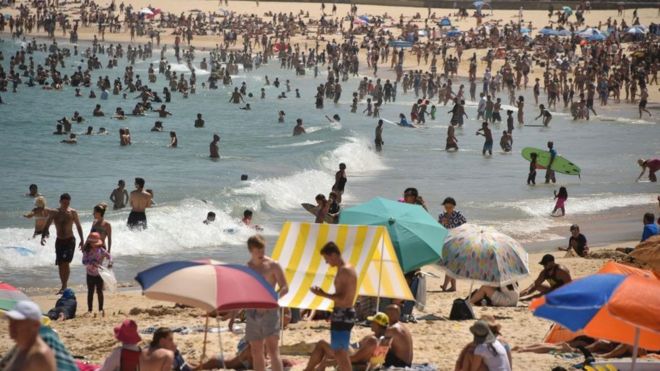 Record-breaking heatwave forced Australians to move towards beaches to cool off.

The Bureau of Meteorology (BOM) has described its highest minimum temperature ever recorded. The meteorologists are also comparing the current readings with the worst heatwave in 2013 wherein the temperature remains 39C for seven consecutive days.

7 January 2013 was the record hottest day in Australia with average maximum temperature 40.3C. A senior meteorologist from Bureau of Meteorology, Blair Trewin further detailed that the recent “heatwave ranks alongside that of January 2013 as the most extensive and prolonged heatwave on record over Australia”.

Most of the areas in New South Wales has affected with the brunt of the heat. The temperature also increased in many areas of South Australia, Queensland, Victoria, and the Northern Territory. Forecasters have further predicted a drop in temperature in southern and central regions over the weekend.

However, they are also expecting an increase in temperature in Western Australia with 14 degrees higher than average.