The Subsidiary of Huawei, Honor is ready to present their next smartphone Honor View 20 (Honor V20) on December 26.  For a number of weeks, the company has been teasing the handset. Honor V20 Leaked Posters came out on the internet that assured the presence of 25MP Sensor for the display hole and 4000mAh battery capacity. Freshly, the phone was listed on AnTuTu. Several of the specs of the smartphone have been assured by Honor V20 AnTuTu Listing .

On AnTuTu, the Honor V20 was listed having model number of PCT-AL10. The AnTuTu listing has disclosed that the 8GB variant of the neext handset is supposed to be here having 256 GB of internal storage. Further than that, the Kirin 980 chipset is going to power the smartphone. Furthermore, 2310 x 1080 pixels are to be supported by the display. In addition, the regular benchmarking score of Honor V20 is 274,343. It is very much lower as compared to the earlier disclosed score of 291,244. 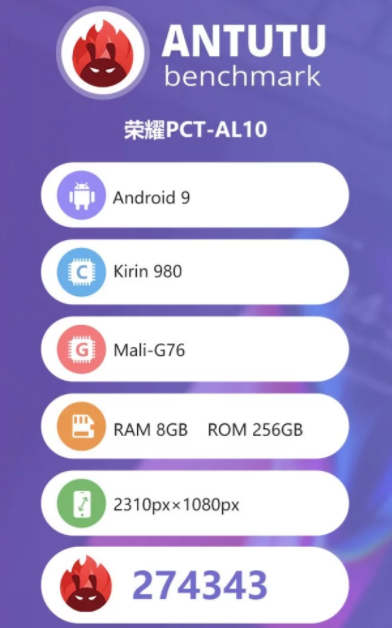 The earlier disclosed posters say that the handset is going to have a 4,000 mAh battery. Further than that, the phone is going to feature a 25MP sensor in the display hole. Moreover, the smartphone is supposed to contain a Turbo Link feature that is to use the Wi-Fi network and the 4G at the same time while downloading. The next handset is going to feature an All-View Display, a 48MP back camera, a Kirin 980 processor, 22.5W fast-charging and Link Turbo.

In addition, as the listings say, the phone is going to run EMUI 9 based on Android 9 Pie very differently. Coming t its design, the handset is going to feature an earpiece in the frame. The power and volume keys are to be there on the right side of the handset. Further than that, it is also going to feature a minuscule bezel on all of its four sides. Though, the bezel that is on the base is tipped to be rather thick. The phone is going to come out on December 26.